Cookie preferences
This website uses cookies, which are necessary for the technical operation of the website and are always set. Other cookies, which increase the comfort when using this website, are used for direct advertising or to facilitate interaction with other websites and social networks, are only set with your consent.
Configuration
Technically required
These cookies are necessary for the basic functions of the shop.
"Allow all cookies" cookie
"Decline all cookies" cookie
Amazon Pay
CSRF token
Cookie preferences
Currency change
Customer recognition
Customer-specific caching
Individual prices
PayPal payments
Selected shop
Session
Comfort functions
These cookies are used to make the shopping experience even more appealing, for example for the recognition of the visitor.
Note
Statistics & Tracking
Affiliate program
Google Analytics
Track device being used
Categories
Information 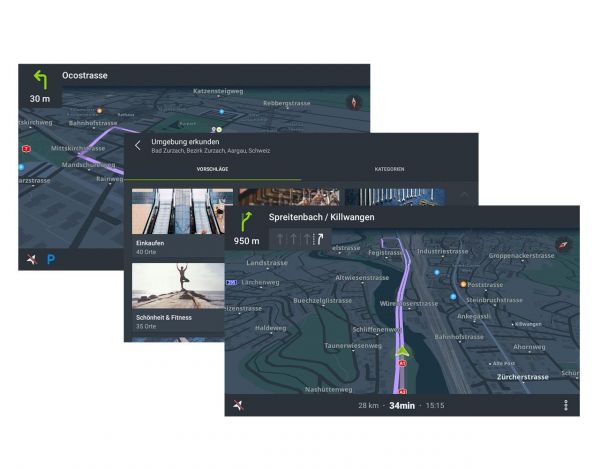 Radical's Radical GPS navigation software is optimized for the T8 Infotainer, which has been adapted for best functionality in combination with the Radical models in some areas.

The Radical GPS app uses digitized offline map material from the provider "Open Street Map", which was subsequently checked and supplemented by professional additional services. The map material used by Radical differs from the free OSM map data by an increased quality with additional data and offers a very good price-performance ratio ...

The map data contained in the Radical GPS app covers 47 European countries * 1. Included in the package is an in-app update function to keep the cards up to date for up to 3 years. For the in-app update, only one Wifi Online Access or one Smartphone Hotspot with corresponding data volume is required.

The clear presentation convinces with targeted reduction to relieve the driver visually. However, the active route with the closer environment always remains detectable as a whole. Also of great practical use are the integrated driving aids, which allow easy orientation in complex driving situations. For example, the display of the motorway lane to be selected, the speed warnings when exceeding the maximum speed and the compass direction icon. The route info provides information about the remaining distance in kilometers to the destination, the remaining travel distance in minutes and the arrival time.

The modern system architecture is also evident in the "One Box" destination input function. The input accepts free text, similar to the use of internet search engines. Thus, the destination input is no longer bound to a rigid predetermined sequence (such as land, city, street, etc.).

The operation of the map section via the multi-touch display of the RADICAL devices is also up-to-date. With two fingers you can move the current map section in all directions, rotate or zoom in and out through "pinchen" in the map.

Those who want to stop on the way to refuel, shop, park or eat and drink can use the function "explore the surrounding area" or "places nearby" to suggest suitable destinations.

47 countries with coverage of Western and Eastern Europe, Turkey, Ukraine, Belarus and Russia.